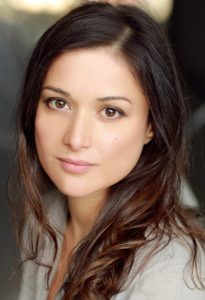 Daphne Alexander was born in and spent her early years in beautiful Cyprus, partially grew up in London and divided her time between England, France and Greece. This stunning actress has chameleon qualities as she aptly plays characters from around the world, this wonderful versatility has helped Daphne stand out from the crowd and got her noticed by Roman Polanski for the award-winning film ‘The Ghost Writer’, by Olatunde Osunsanmi for ‘The Fourth Kind’, by Jim O’Hanlon for ‘House of Saddam’, by Anthony Maras for the award winning film ‘The Palace’ and by Simon Curtis for ‘The Amazing Mrs Pritchard’.

Completely trilingual, she read Law at Oxford before training to be an actress at LAMDA, where she played parts such as Masha in Chekhov’s ‘Three Sisters’ and Isabella in ‘Measure for Measure’. Just three months after she graduated she landed the role of regular character Nadia Talianos on the BBC’s most popular and high rating medical drama ‘Casualty’.

After enjoying a year playing Nadia Daphne left this wonderful show for new and exciting TV roles including; Janita in ‘The Amazing Mrs. Pritchard’ directed by Simon Curtis and Sara in ‘House of Saddam’ directed by Jim O’Hanlon.

Daphne was quickly cast as Connie, legal intern to Timothy Hutton’s character in Roman Polanski’s award-winning film ’The Ghost Writer’, and native Alaskan girl Theresa in ‘The Fourth Kind’, a film produced by Gold Circle and directed by Olatunde Osunsanmi.

She stars as a beautiful Iraqi novelist in the independently produced film ‘Meso Café’, directed by Ja’far Al Hamid, which premiered with Raindance Film Festival in Piccadilly Circus.