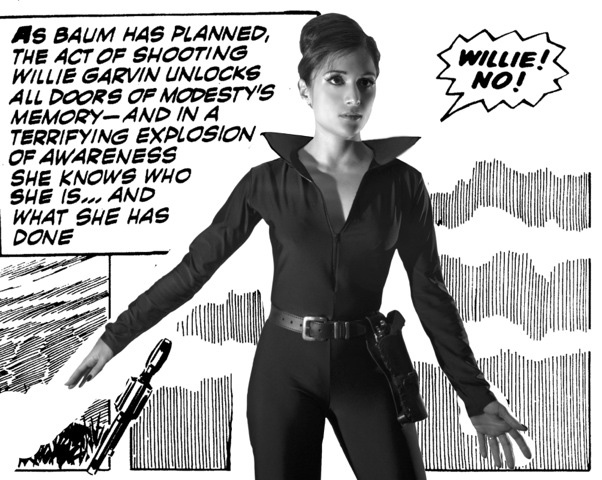 Posted at 09:00h in Reviews by Daphne Alexander
Share

Back in the 1960s the writer Peter O’Donnell challenged the idea that only a man could be as daring, dashing and debonair as James Bond by creating Modesty Blaise, the heroine of a comic strip first published in the London Evening Standard. Modesty is every bit as chic as Bond, drives a Jensen, listens to Thelonious Monk, wears a catsuit (of course) and is just as deft with guns and martial arts. She’s also so smart she can twist every man she meets around her finger. In this dramatisation by Stef Penney for Radio 4’s 15-minute drama slot, Modesty (played deliciously by Daphne Alexander) gets caught up in a plot to kidnap a British intelligence officer while on holiday in the south of France (where else?).

‘I’m doing for blackmail what Ford did for automobiles,’ boasts the chief villain, Colonel Jim, in a terrible American accent. Modesty meanwhile revs up her Jensen as she rescues the chief witness to the kidnapping. ‘You’re a real cracker, Duckie!’ he exclaims. It’s all very silly but so refreshingly dated in a production (by Kate McAll) that’s every bit as slick and engaging as the Sunday-night drama on Radio 3, Jenny Lomas, by the award-winning writer David Eldridge (and produced by Sally Avens).

Jenny is a solicitor who specialises in family law and takes on the case of a young girl whose parents, a Polish ‘civil servant’ and his English-born wife, are fighting over who should have custody. It sounds simple enough until Jenny’s car is tampered with, her flat is burgled, her cat exterminated. She is frightened and then confused when no one, not even her boyfriend, believes her. ‘What’s real and what’s in someone’s head?’ she asks in a creepy, clever play that investigates the impact of the internet and our own willing submission to its dangers.

by Kate Chisholm, The Spectator